Optional button
Sunday morning was one of the most spectacular mornings for a while. The sky was clear and blue, but more than that the light at 8am against the multicoloured leaves was just sublime. OK, that's the poetry over with, so let's get down to kit! 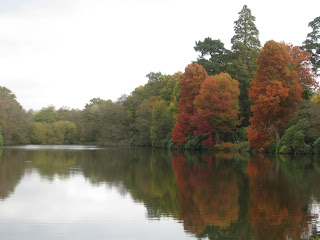 Now I'm going to start with a bit of controversy. I like to wear technical underwear under my cycling shorts or tights when it gets cold. I have been told and read that this is anything from heresy to uncool in the cycling community. However, I have been riding for 28 years (if you count stunt riding on BMX!) and I have always found it to be far more comfortable for me to ride with technical underwear. It's so much warmer, more snug and you don't get cold on the hips or lower back(I mean VERY lower back). I guess one of my points here is that just because something is convention, it doesn't mean that it's the best thing to do......just ask people who voted for Bush in the US elections (DAM! just gave away my political convictions.....oh well, probably lost at least two followers there.......back down to three again! Bugger!).
I digress......again. So Sunday was about 9 degrees celcius, sunny, but very little breeze. It felt a little warmer standing outside, so I decided to go with the Brynje Sprint Boxers under my cycling shorts. On top, I wore the Brynje Super Thermo T-Shirt with a Brynje Sprint zip polo over it. Capped this off with an Altura Transfomer windproof light soft shell.
Now I see (and saw on Sunday) a lot of cyclist wearing all kinds of different kit. We passed a few riders looking like they where on their way to the Pole with skull caps, winter gloves, winter tights heavy soft shell.....the works! As I'm sure you've already guessed....we also passed riders in short sleeve  shirts and bike shorts! Again, point I'm making here is that everyone is different, and the only way to find out what works is to read what other people are doing and try it, or simply test things yourself. When someone tells me this and that should work under these conditions, I try it, but then fine tune it so I know what works for ME in those conditions. But I'll tell you right now.......I don't like being COLD! I did that on field work at University when I had the budget of an eighteenth century chimney sweeper!
So, as we took off on the ride, I was nice and cosy, and remained that way all the way to the first climb. I hit it hard, and so had the inevitable warming up, so I simply unzipped the Altura, opened the neck on the zip polo, and let my body exchange the air a little. I waited for the guys at the top of the climb, but once there, subjected them to some horrific test verification. I had one of them put his hand under my Jacket to feel how wet the Sprint was, but then made him touch the Mesh and feel how dry that was! Now these are good mates so I don't recommend doing this with people you don't know well......you'll end up riding alone! But as followers of this blog will now know(yes, all three of you now that we have lost the political Right), this is something I do often to show how well the Brynje kit performs. I must admit to pushing the limits of friendship however as I had one friend (thanks Paul!) feel how dry my boxers shorts were and how the cycling shorts had taken all the moisture. I know.....I'm SICK! But I love the way the kit works!
Next we had a decent descent and then on to rolling roads down to Heron's Ghyll and then onto Maresfield. The windproof came into it's own here, keeping out a cold breeze, and the base layers kept the internal temperature really comfortable. Again, I can't stress enough here, that a lot of this is down to the fact that your core stays dry (or to be technical about it, mildly damp/clammy but not wet). Too many manufacturers use the word "dry" when they mean "less wet".
Had another climb up Duddleswell hill, and again, vented a little, but not that much (I hear cries of "your not working hard enough!".....but I was!).
Conditions stayed around the 9-10 degrees for the entire ride, with the only change in temperature coming from the wind.
Again, the kit I had on was just bang on, but I will say that my legs got a little cool on the descents....so it was borderline tights weather for me.
Looking forward to some more temperature drops to really test the next lot of kit.....bring on the big freeze!
P.S Apologies for the lack of pictures.......will try harder next time!
Share Share on Facebook Tweet Tweet on Twitter Pin it Pin on Pinterest
Back to The Right kit
Example blog post
Example blog post
Example blog post