Optional button
Sorry for the delay.......I told my folks I'd be writing about this trip and they expected it all done by the next day! Modern life just doesn't allow it! Anyway........!
Day 2 started very nicely with a great breakfast at 8am. We also made sandwiches for lunch, which I like, because you can load them up to your hearts content.....unlike some of the skimpily filled store bought sandwiches. Needles  to say my sandwich pack weighed the same as a small family car!
Everyone was very excited because we were heading out to go dog sledding and to learn how to handle dogs on expedition.
After about half an hours drive we got to the farm and were greeted by the sound of 26 very excited dogs. Now on first appearance, and going by reputation, I though they were excited because they thought they might get a piece of us. However, Bodil, the boss assured us that they were very friendly dogs, and that aggressive ones are bred out.....or worse! And so after a briefing we set about getting the dogs into their harnesses whilst being licked vigorously from head to foot! 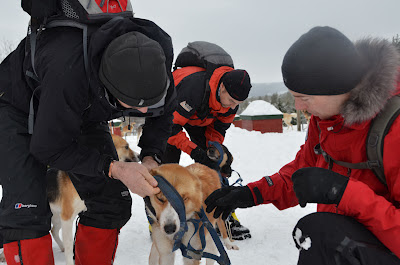 We had a very serious lecture on never getting off the sled without sinking the anchor, never take your foot of the brake when stopped and don't fall off! Apparently the dogs just keep going and some poor bas*£$d has to chase after them on another sled!!! I didn't fancy being the muppet who did that so I was very careful with the dam brake!
Once we took off in teams of three, with our guide leading us, the first thing that struck me was the quietness. After all the yelping and barking, once they get going they are silent......because they are pulling a heavy sled through the snow! Brilliant! It was beautiful. Gliding through the new snow with a a swish sound and being able to take in all the scenery...... 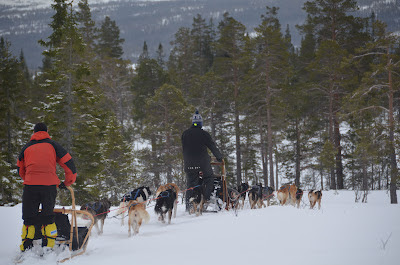 While the trip was fun, it gives you a perspective of life on an  expedition with dogs. There's the noise, feeding, securing etc as well as the physical aspects of handling a large sled over sastrugi.....
Much to my joy, our host had cooked burgers for us on the fire as we waited for everyone to have a go.......Norwegians really know how to do "OUTDOORS"!The coffee was also a welcome since I had been seriously missing my mid morning tea breaks. 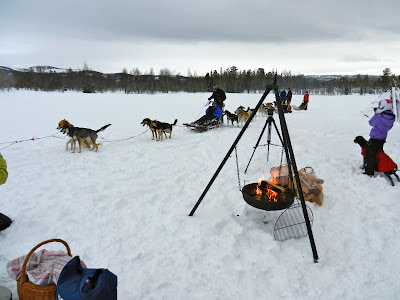 After all the fun, it was back to the hotel to start packing gear for the "big night out"! .....no, not down at the local disco but camping outside in the cold! We all pitched in to help pack the pulkas (expedition sleds), and cut ropes to length, tested stoves and packed food. 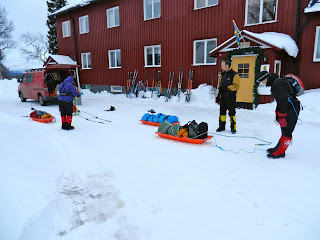 Again, we got loads of information regarding what to do to make life easier all the time. ATE's philosophy is to work with the elements and nature and not against them. So after all the packing an checking was done, we skiied to our camp, pulling the pulkas. We did not have that much daylight left, so Petter got about setting up the demo tent right away...showing us how to work efficiently and quickly always adding tips such as the extra difficulty of doing this in a gale!!! 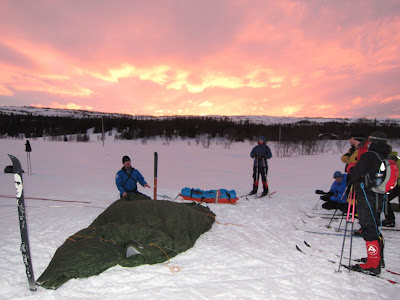 It was our turn, and to be fair to everyone, we got our kit up pretty quickly, dug our snow trench in the vestibule and set about lighting the stove. Snow was melted and tea was brewed up, followed by freeze dried chicken curry. I must admit to being a little worried about the choice of food and it's spicy nature.....after all the last thing you want to do is crawl out of your sleeping back at -20C to re-aquatint yourself with the chicken curry at 4am!!! 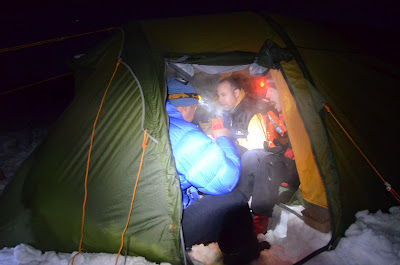 Being the keen trainees that we are, we had everything wrapped up by 8pm, and so started to think how we would spend the rest of the evening. However, there was a suggestion of a nighttime ski under the stars which everybody jumped at. So out we headed with one of the instructors, headlamps off and out across the snow. Wed did have to turn them on to climb through the forest, but again once up on the plateau, we used the light of the full moon. It was just amazing and enjoyable. We got back about an hour and a half later to find Petter waiting for us with  a bottle of wine. Needless to say we all squeezed into our tent and enjoyed some more anecdotes of expedition life and Arctic travel. So it was then to bed with temperatures heading down towards -15C. However, I was happy in my -20C sleeping bag and fell asleep wondering if I'd every see that chicken curry again!
Share Share on Facebook Tweet Tweet on Twitter Pin it Pin on Pinterest
Back to The Right kit
Example blog post
Example blog post
Example blog post