Optional button
So I've just got back from Norway and brought a few new prototypes back with me to test. There's nothing like going round a factory going "I'll have one of them....and ooo! That's looks cool , I'll have one of them too!" However, the reality is they need to be tested and so it was I headed out after work to take the dog for a run on the Ashdown forest......in the rain. Yes, it has actually rained here in the South East of England! Not enough I might add to reverse the current hose pipe ban! Yes, a hose pipe ban in April. So, I thought it would be a good opportunity to test the prototype windproof and again to test how warm Brynje mesh keeps you....even when wet.
Weather was 9C, wet with a moist southerly breeze. It was wet underfoot so had my Sealskin socks on, a Buff headband, Brynje Sprint Boxers, Brynje Super Thermo mesh T-shirt and Brynje Sprint 3/4 neck shirt on. Had the old standard Ron Hill bottoms on to keep my legs warm. 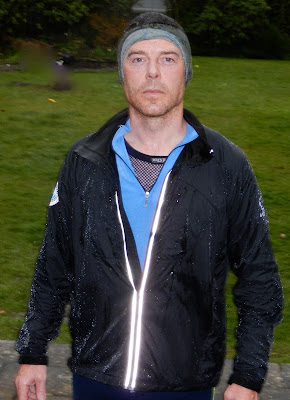 It rained to varying degrees though out my 50min run but both me and the dog where just happy to be outside. As you can see from the picture, the jacket beaded water off really well, and was very windproof. We need to take out the lower pockets, change the collar and make a few small adjustments, but after that, I think we'll have a winner. It wasn't, of course fully waterproof, but it held out surprisingly well considering the sometime heavy downpours. My Sprint shirt was wet in places from a combination of rain and sweat.........but that's exactly what it should be doing! It's the cap layer and a receiving layer for the sweat, and it did it well. My core? Well warm of course! The Super Thermo mesh T-shirt kept me at a very nice temperature. It parts the mesh was damper than normal due to the possible saturation of the cap layer in some areas, but this is what I wanted to test. Even though the mesh was very damp, I was still warm because the actual surface area of the mesh is only about 40%, thus most of what is next to the skin is warm air and not sodden base layer material.
So it was a very informative test run, and another boxed ticked as to the performance capabilities of the mesh base layer......oh and the dog had a blast too!
Share Share on Facebook Tweet Tweet on Twitter Pin it Pin on Pinterest
Back to The Right kit
Example blog post
Example blog post
Example blog post